You are here: Home / Nights In / Wichita Lineman by Glen Campbell 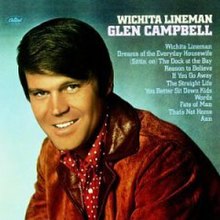 Having heard the song Wichita Lineman on the radio I idly tweeted about what a great song it is. Expecting my usual tumbleweed response Kim Wilde retweeted it (clang!!) and suddenly lots of people were telling me how it’s their favourite song. Including Jo who used to post at the old place. She wrote

There’s a piece of cine film of me saying it’s my favourite song. I was 3 years old. Still nothing has overtaken it for me. (I called it the ‘need you’ song.)

It’s a given that most people know and love the song but what about the album it came from? I’ve been listening to it all week and these are my thoughts. Glen Campbell was born in 1936 so was 32 when the album was made and a quick Wiki shows me that he’d already had a remarkable career before that. Playing as a session musician for pretty much everyone from Dean Martin to Elvis Presley. Top fact. By 1963 at 27 he had played or sung on 536 recorded songs. This became important to me because the album is really quite dark in parts and didn’t fit with my naïve idea that Campbell was just some plucky 20 year old country singer. The fact he’d clearly already lived some life made the album start to make sense.

There’s not much more to say about Wichita Lineman the song that hasn’t already been said. It’s pretty much perfect and everything seems to be working together. Lyrics, arrangement, vocals in perfect synchronicity to produce one of the great songs. The fact they follow it with a fairly ordinary cover of (Sittin’ On) The Dock Of The Bay didn’t bode well but then. Oh my goodness.

If You Go Away is just gut wrenching. Campbell’s vocal heart breaking over a simple arrangement of a Jacques Brel song. I’ve heard Jacques Brel mentioned here, mostly in relation to a Marc Almond covers album. If You Go Away ensures that once I’ve finished with Glen Campbell, Jacques Brel will be my next stop (recommendations welcome). It’s the kind of song that would literally stop you in your tracks if caught unawares. If you’ve ever had your heart broken tread very carefully.

After that start we get Ann a straight up country song. Appropriate for 2022? Probably not but as a historical reminder of how different life was in the ‘60s pretty accurate I’d say. I mean he clearly loved her and it’s quite sweet in it’s own way but not exactly how women want to be viewed in 2022.

We then get The Bee Gees song Words. Again a pretty standard cover version. It blows my mind a bit that The Bee Gees were providing songs like this in 1968 when in my head they are 70s icons. When I heard it here I’d assumed it was a Campbell song that they had later covered but nope, they were knocking this kind of brilliance out for fun in 1968.

Side one ends with a Campbell written song The Fate Of Man which is a really depressing haul through the life of a man. Campbell almost narrates mapping out various failings, disappointments and ailments from 20, a leap to 50, 60, 70 and finally 80 before closing with

Well thanks Glen, I’ll bear all that in mind. Sheesh.

At this point in proceedings we get another remarkable song. The Dreams Of The Everyday Housewife is a lament to a lady who gave up her dreams to become and everyday housewife. Reminders come at her thick and fast from her wrinkles to an old photo album and imagining her house dress becoming the gown That broke all their minds back so many years As another snapshot of 60s life for many women through the eyes of a man who realises that her disappointment is on him. An everyday housewife who gave up the good life for me So sad but another little time capsule to the world as it was fifty odd years ago. I must add that it’s a beautifully arranged song and perfectly sung by Campbell.

Suddenly all my silly thoughts disappear,
She comes to me softly with crackers and beer,
Winkin’ and blinkin’ and blowin’ in my ear,
Runnin’ away with my mind.

So far one brilliant song has lead me to discover some more and take a tentative step into a genre I’ve only really encountered through Mike Nesmith and the occasional country crossover song like Islands In The Stream. What comes next I’m not sure I’m able to do justice to. I will say if you take nothing else away from this please, please find You’d better Sit Down Kids and listen to it. First up it’s written by Sony Bono. Second it starts as a slow, sad story of a man telling his kids that Mom and Dad still love them but they don’t want to argue no more so Dad’s moving away. Standard stuff but very moving and if you’ve been through it, ouch. What happens next though when Campbell goes on to give the kids instructions on how they should behave in his absence is all kinds of mad and I can only assume points to drug use during the recording. It’s not so much a key change as a whole new band change. Suddenly from sombre country stylings as Glen explains why he’s leaving someone thought his instructions should be accompanied by some groovy upbeat 60s big band sound like Tom Jones may have used on Morecambe and Wise. Then without warning it all slows down again before a repeat of the big band groove. By the time it ends with some classic country banjo fade out I was literally laughing out loud at a song about a man leaving his kids. Bonkers, absolutely bonkers.

Thankfully normality is restored with the closing song That’s Not Home a gentle country waltz about leaving home or some such.

What an incredible thing it is. Not what I was expecting but I’m so glad I’ve listened and learned.

Country is a genre I need to investigate further. Clearly Country music is rooted in hardship, relationships and hurt which was probably the lives of those who created it as an escape from it all. Some of this stuff makes Del Amitri seem like Big Fun.

Country and western. Love and Loss. Crackers and beer.

Login to The Afterword