You are here: Home / Nights Out / The Unthanks 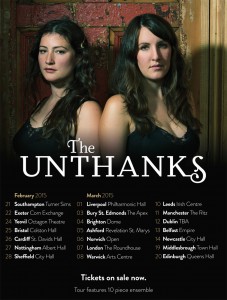 ‘You know it’s going to be miserable, don’t you?’ warned Becky Unthank ‘but we’re wearing our clogs’ “Clogteasers” pianist & arranger, Adrian McNally, chimed in and those were rare moments of humour in a bleak yet uplifting night – a beautiful oasis in the den of scum and villainy that is Camden. The support set from vocal group ‘The Young Uns’ with a fine cover of ‘Between The Wars’ and a song about Benefit Street in between the sea shanties and traditional material got the place whooping and singing along but The Unthanks set offered little of that.

Their ‘Mount The Air’ album had the lion’s share of the set, greeted like old friends. The intricate arrangements were recreated perfectly but in no way clinically, there was grit, warmth and emotion there even if the band did sometimes swamp Rachel & Becky’s vocals during the louder sections. Speaking with fellow attendee Mr Rosbif afterwards we agreed that although Rachel’s voice has always been the groups selling point, live and on the new album it is Becky that catches your attention with its unusual timbre and emotive power as in the woozy, trippy. ‘Flutter’

To keep a couple of thousand people gently swaying on their feet in rapt silence for nearly two hours takes a special bond between band and audience. Creating such an atmosphere with stunning music and musicianship is what makes The Unthanks unmissable.

Despite my fears that a standing audience would get chatty n fidgety having to remain fairly static for a couple of hours but the silence was golden and applause – especially at the end of ‘Mount The Air’ which took the band aback. Adrian McNally dedicated their cover of King Crimson’s ‘Starless’ to “anyone who wishes they were sitting down”.

Twenty quid. That’s all it cost tonight for what will probably be vying for my gig of the year come December. Those who could have been here but were not for trivial reasons shall think themselves accursed they were not here, and hold themselves cheap bastards whiles any speaks that
saw The Unthanks this Saturday.