You are here: Home / Nights In / The Strawbs – “Deadlines” Expanded 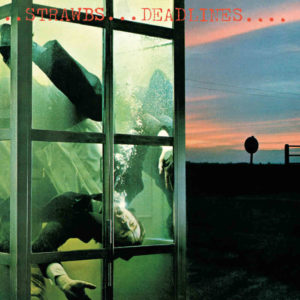 Dave Cousins wrote a song for the “Burning For You” album called “Goodbye”, which he had intended to be just that. And yet here he was, a year later releasing another album, in the midst of the UK’s punk boom.

Cousins sleeve notes for this expanded re-release (the original album plus his home demos and a CD/DVD of a 1978 Sight & Sound Concert) have a refreshing candour. Wooed by his management to record again with Arista, he fesses up to his reservations about producer Jeffrey Lessing and the small obstacle of having very little material. Guitarist Dave Lambert provides more of the vocals and the album mixes some polished prog with more straightforward pop.

I’d never heard the album before, and I’ve found each play the album has grown on me. Opening rack “No Return” is an up tempo piece of pop / rock with the multi-track vocals just staying the right side of overdone. “Sealed With A Traitors Kiss” veers into more “epic” ballad territory but tries a little too hard. “I Don’t Wanna Talk About It” is in the same vein and does better – the repeat chorus is truly memorable. “The Last Resort” is a harder, guitar driven rocker that lets Lambert showcase his licks.
From this point there’s a drift downhill across the rest of the album. “Time and Life” is overworked and halting whilst “New Beginnings” a touch too saccharin. “Words of Wisdom” offers up a more prog landscape before the album closes with the rocker “Midnight” – the slightly unhinged vocals swamp what could otherwise be a good song.

The acoustic demos offer a chance to hear how some of the songs originated, their simplicity a significant contrast with the finished article. Beyond diehard Strawbs fans I’d imagine they are unlikely to be played a lot. The last 3 tracks (including “No Return” and “Joey & Me”) are alternate takes from sessions recorded in Dublin which Cousins preferred to the released takes. Listening to them side by side I’m inclined to agree, being sharper and more vibrant.

The Sight and Sound CD sets out how some of the album sounded live without the extra production – for the most part a slightly rougher edge and extra live energy – a welcome addition. There’s also a mix of earlier songs, including “Shine Like A Diamond”, “Heartbreaker” and the closing “Hero and Heroine”, a very different style of Strawbs from the one found on “Deadlines”.

A case of musical schizophrenia perhaps

At times a can of Ruddles. But then come the prosecco tracks