You are here: Home / Films / The Lego Batman Movie 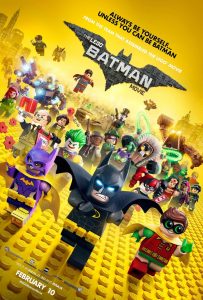 ‘Every film starts with a black screen….then some creepy music…. then a logo…..Warner Bros? Why not Brothers….’ and right from the off you know that the film isn’t afraid to prick the pomposity of the ultra gothic darkness of the Nolan caped crusader flicks. Batman was the insular macho ass of The Lego Movie and here Will Arnett has the tone of Alec Baldwin’s ‘SNL’ Trump impression although am sure its purely coincidental that both are self important deluded billionaires.

The plot, such as there is one, revolves around The Joker’s annoyance that Batman doesn’t consider him as his mortal enemy or even that they have a relationship. The script throws little barbs at weaknesses in previous Batman outings – ‘that thing with the two boats’ and the campy sixties version with a joke about shark repellent which has a lovely pay off. On the way he drools over Commissioner Barbara Gordon to the soundtrack of Cutting Crew’s ‘I Just Died In You Arms’, accidently adopts his sidekick Robin and with the ever faithful Alfred The Butler (drolly voiced by Ralph Fiennes) tries to foil The Joker’s evil scheme.

There are pop culture jokes from across the board, every Batman villain is included – including the rarely mentioned Condiment King plus other parts of the DC universe and English Robots AKA Daleks.
The scenes are packed with one liners as well as visual jokes that no doubt will only be spotted in multiple reviewing that parents will be subjected to. I don’t think they will mind thou cos this film has entertainment on so many levels that it never gets dull. There are no songs as brilliant as the first movie but everything is still awesome

The Lego Movie and laughing