You are here: Home / Films / Rogue One 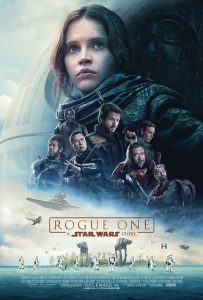 Christmas Eve, the BJB clan are staying at my mum’s. Usually we go to the theatre, but since Mary Poppins was booked up months ago we decided on a visit to The Pictures.

None of us are real Star Wars nuts. My daughters were more into Harry Potter. I was a little too old to surf the first Star Wars wave. In fact, Mrs BJB is the biggest fan in the family as she took her youngest brother to see Episode IV on its original release. Anyway after a bit of to-and-froing, the family decided to see Rogue One while it was still on a big screen.

I had caught up with Gareth Edward’s first film Monsters a year or two after its release. I enjoyed its noirish atmosphere but wasn’t entirely bowled over. So I wasn’t expecting too much from another chip off the old franchise. Hence, being bowled over by R1 was a real surprise to me.

First off, the cast are all proper quality actors and although most of the characters are off the shelf action stereotypes – the seemingly cynical soldier who hides his principles, amoral hustlers who find a cause to fight for, and the dad who who makes huge sacrifices to protect his daughter – they bring them to life. Felicity Jones in particular makes the film. Her character, Jyn Erso, is a real action hero – someone who you believe the band of rebels would follow into the Jaws of death.

There are surprises in the cast members, which don’t always come off and, yes, parts of the plot turn on blatant McGuffins. But that said, the last third of the film is pretty visceral and closer to modern war films like Saving Private Ryan than Disney’s usual fare. In fact, although R1 is a 12A, I think some younger Star Wars fans may find the end just too down beat to handle emotionally.

On the other hand if The Empire Strikes Back is your favourite from the original trilogy (and it should be) you’ll love this.

The Empire Strikes Back, Saving Private Ryan, the middle Harry Potter film, or even Stranger Things.