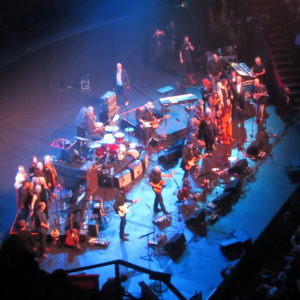 What a night. What a phenomenal night! How to celebrate this extraordinary man who has spent more than 50 of his 70 years writing extraordinary songs of apolalypse and redemption, and coupling them with unmistakable guitar playing to the acclaim and adulation of far too few? Stick on a big gig at a prestigious venue and bring along a bunch of family, friends and acolytes to help out, that’s how.

From the get go we were promised an evening of song, friendship and nepotism by our MC Jack Thompson (Richard’s youngest, you see what he means?) and that’s what we got in spades. It is in the nature of a guest list show, with every performer getting one or two songs before making way for the next, that you hope for a collection of highlights rather than a consistent narrative, so I’m going to lean heavily on the setlist which someone stuck up on Setlist.fm with admirable speed and comment on each one, rattling through the songs and guests off the top of my head rather than tackle the evening in themes. The result is far too long and barely edited so feel free to skip through looking for names you are familiar with.

Richard took to the stage with his current trio band, Mike Jerome on drums and Taras Prodaniuk on bass, enhanced by guitar tech Bobby Eichorn on second guitar and current partner Zara Philips on backing vocals. Perhaps it was the up scale venue, but he spurned his recent superannuated biker look of sawn-off denim jacket from a smart brocaded frock coat (swapped for a plainer black number in the second half). I love this band though I know that others, Hubert Rawlinson included, are less keen so it was a disappointment to find that the music was swampy as lacked treble up in the gallery, and I wondered if I was to suffer the notoriously bad RAH sound. Thankfully about halfway though the opening number, The Storm Won’t Come, from superb and most recent album 13 Rivers, word got to Bobby who fiddled with a lead on stage and suddenly the hall was flooded with that wonderful, sulphurous Richard Thompson electric guitar sound.

Then it was straight on to the guests. Although this wasn’t a chronological retrospective first up was Richard’s old school friend Hugh Cornwell, better known as a Strangler than from the pair’s teen adventures in Emil and the Detectives. An efficient run through of Tobacco Road, from their old setlist, was followed by the unlikely sound of Richard and Hugh partnering on Peaches, then Hugh’s own The Most Beautiful Girl in Hollywood. This generosity in not only sharing his stage with his guests but performing their songs as much as his own was repeated through the night.

Cue some former Fairports, including band founder Ashley Hutchings (Simon Nicol was apparently stranded on holiday and Ashley’s son Blair Dunlop stood in). Blues in My Bottle and a snarling Jack O’Diamonds represented the earliest days of Fairport, then it was on to the Richard and Linda catalogue for Down Where the Drunkards Roll, with Dave Pegg providing mandolin and a touching vocal.

The next guest up was Bob Mould and this was where the evening, which had already been fantastic, really started to take off for me. He and Richard swapped ferocious solos on Turning of the Tide before taking on the Sugar song If I can’t Change Your Mind (I confess that I wouldn’t have known the name of this one, and some others, without that handy set-list). I could listen to Richard play with that sort of attack all night, though I would probably be deaf by the end of it.

Just as well then that things took a folksier turn next, with the lovely Kate Rusby whose quavering voice did full justice to Withered and Died and her own As the Lights Go Out. Marc Ellington made his jovial presence felt with a singalong Bonnie Lass O’Fyvie, and then it was the turn of the Carthy clan.

Martin and Richard were superb on Fare Thee Well, Marry Waterson was splendid on Fine Horseman, but then Eliza, oh my God, Eliza. Who could have guessed that one of the absolute highlights on a night packed with them would be when Richard wasn’t even on stage? The RAH is a spare venue, with no room for backdrops or more than fairly simple lighting. There is no hiding place for anyone whose performance alone isn’t enough to hold the venue. Eliza sang The Great Valerio a capella, heavy on the Yorkshire accent and emotion, and must have crushed every heart in the room. The Great Valerio is an allegorical song about a tightrope walker, but unlike Valerio Eliza didn’t even have a safety net. An astonishing performance.

The first set came to a close with Richard and more Waterson Carthy’s back on stage for a swinging Hug You Like a Mountain which turned the cavernous venue into a cosy revival meeting, sending everyone into the interval with a warm glow and at least a dozen songs in each of their hearts.

Come the second half and out came Richard and Danny Thompson for an audience pleasing Beeswing, before the evening’s sole instrumental – Madame Bonaparte played with master squeeze-boxer Alastair Anderson. From here on in much of the second half was about family. Son Teddy came out for Persuasion, never my favourite Thompson song but I enjoyed this rendition as much as I have ever enjoyed any.

Then it was back to the 90s for the beautifully atmospheric Ghost in the Wind, with Danny and Christine Collister, and Sweetheart on the Barricade (from the relatively obscure Industry album). Danny’s double bass skills brilliantly displayed in the former. Next, Olivia Chaney sang Sandy’s Who Knows Where the Time Goes? And stayed on stage for her own, solo House on the Hill. I have to admit my attention wandered here. While Eliza filled the Hall solo in the first half this performance and song weren’t really up to it. When Richard stayed off-stage for Zak and Maddie Prior to run through Sheath and Knife, I was starting to think he was being a bit too generous with his stage time. Even when he re-appeared to join Zak and Maddie on Grey Funnel Line his playing was muted.

Thankfully things picked up when he was next joined by The Rails (daughter Kami and her husband Pretender James Walbourne). A bouncing Keep Your Distance, with Richard and James swapping solos, put the pep back into the night before, joy of joys, Teddy brought out mother Linda to join him, his sibling Kami, Kami’s husband, Richard’s son Jack on bass and grandson Zak on guitar, for an attacking That’s Enough. I can’t claim that I could distinguish Linda’s vocals in the mix (she has famously had trouble singing on stage since the time she and Richard got divorced) but I can say I have seen Linda Thompson sing, and that is something I have wanted to say for decades.

Judith Owen was the next guest for Cry Me a River (the Julie London one, not the Justin Timberlake one), which fans will know she sang on Richard’s Thousand Years of Popular Music project. If Judith was there it was a fair bet that her husband couldn’t be far behind, albeit in the guise of ‘the former bassist of the band formerly know as Spinal Tap – Derek Smalls!’ Mister Smalls treated us to She Puts the Bitch in Obituary, helped out by a stinging Thommo guitar solo, blood red stage lights and a sea of devil-horn hands in the crowd.

We were on the final lap now, and here comes Loudon Wainwright III to reconvene the 80s partnership of Loud and Rich. The Swimming Song was Loudon’s contribution, followed by a slightly rickety I Want to See the Bright Lights Tonight.

There was no official ranking of the guest performers, but a buzz went round the hall when Jack announced the final guest of the night as everyone know it would a man ‘from a little band called Pink Floyd’, and out stepped David Gilmour. I love David’s playing almost as much as I love Richard’s and was fascinated to hear how the would play together. Their first song was Dimming of the Day, which David has already played in his own shows. I was surprised to see both he and Richard played it electric (Zak was on acoustic). Is it possible to listen too hard to try to make out a sound? Then there was a pause, and David stepped up to the mic and began to sing ‘When that fat old sun ..’ and it was bloody marvellous, leading to him and Richard swapping solos to bring the evening to a huge emotional climax.

Or almost. Of course there had to be a Cropredy style everyone-on-stage rendition of Meet on the Ledge, a song which Richard wrote in his teens at a time when we were all more than half a century away from the ledge than we are now. As tears were dried the house lights rose the thousands lucky enough to have been there stumbled out into the rainy Kensington night, buzzing, stunned, lifted by the power of the music this extraordinary man has been making for his 70 years.

And he didn’t even play Vincent Black Lightning 1952.

Generally grey hair, and lots of fathers and sons as well as couples. A far higher proportion on intellectual looking spectacles than at most gigs.

I was so lucky to be there. That’s a night that will never happen again, and who knows if the sort of performers and writers who can put together a catalogue of music over decades will exist in the future either?