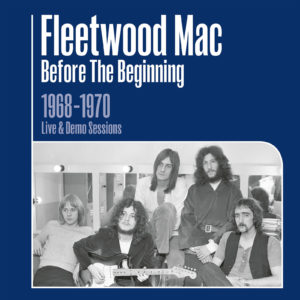 This is the first release of a discovery of a treasure trove of Peter Green era Fleetwood Mac live recordings and unreleased studio sessions from 1968 and 1970. The 1970 material will be released later but volume one concentrates on 1968 when the band had only just formed. Those who love the first album will know what to expect here. Peter’s playing is loud and proud, confident and flowing and remarkably assured for someone who had only just taken centre stage in his own band and in fact had only stepped out as a lead guitarist a matter of years earlier. Peter’s voice is as soulful and uncannily bluesy as a white boy can be, especially as he makes no attempt to impersonate black blues singers preferring to find his own tonality and mood. The Fleetwood and, well, Mac rhythm section is tight and swinging. To this listener Jeremy Spencer is the weak link – I know he was a key part of the early band’s live appeal etc but his two bottleneck licks become wearing when repeatedly played and I have to wonder what other special sauce he brought to a band already overflowing with the stuff (though to be fair his manic “Long Tall Sally is fun). The songs all come from the first album and contemporaneous blues standards, the mood varying from full band workouts to the highlight of “Trying hard to forget” with PG playing and singing solo. Another of my favourites is “If I loved another woman” which features an uncredited harmonica player I am guessing was label mate Duster Bennett who gigged with the band around then and contributed to tracks on other albums. The live sound is excellent, sounding more like studio out takes than “mono tape recorder at the back under a greatcoat” bootleg quality.

We’ve been here before, with “lost masterpieces” being dusted off and issued to an adoring fan base. I detect no sign of barrel scraping here – there is hardly a massive wallet out there for this stuff, but lovers of that early F Mac era, and there are a few of us, will appreciate being able to hear it in nice pristine condition. As a trailer for volume 2, this will contain live material with the band expanded to include Danny Kirwan whose guitar playing adds a deal more muscle to the sound. Volume 2 features live versions of classics such as “The Green Manalishi” and some of the songs Danny brought to the band. It does seem to me a box with everything in might have been a more attractive proposition to the people who have to have all of it, which is probably most of those who want any of it. Watch this space.

Well for me the blues is late night music, though the boogie/bottleneck material is fun at any time of day.