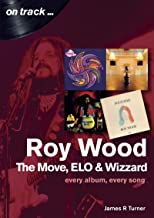 Not perhaps the most obvious choice for one of these books, but Roy Wood’s career has had plenty of high points. I suppose he’s most often thought of now, particularly at this time of year, in the context of the ubiquitous Christmas hit I Wish It Could Be Christmas Every Day, which no doubt still provides a nice festive bonus each year. However, his most creative work was with The Move in the late sixties – I Can Hear The Grass Grow, Flowers In The Rain and Blackberry Way all being composed by him. A brief stint in the first incarnation of ELO was swiftly followed by chart success with Wizzard – hearing again See My Baby Jive and Angel Fingers still evokes memories of my earliest teenage years to this day! After that came a series of variable quality solo albums, each released to diminishing returns unfortunately as his star faded. Nothing new has appeared since 1987, but Wood still plays live performing the old hits that still resonate today.

Wood receives no royalties from Flowers In The Rain – the band were successfully sued for libel by the then prime minister Harold Wilson, and to this day all royalties are distributed among charities of his choice.