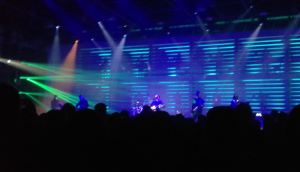 Manchester International Festival can’t be accused of relying too much on the musical heritage of the city itself (previous MiFs have had musical input from the likes of Bjork, Kraftwerk, Massive Attack and so forth) however the spirit of Tony Wilson and Factory was always been bubbling under the surface and this year’s a bit more blatantly Factory/New Order related – as well as the New Order performances there is also a related art Exhibition ‘True Faith’ and tellingly the closing event (bringing Friedrich Engels back to Manchester..of course) is called Ceremony. New Order’s part is a series of shows at the old Granada Studios, an appropriate venue since of course this was where Tony Wilson presented ‘So it Goes’ and delivered The Sex Pistols to an unsuspecting public and Joy Division themselves made their first TV appearance here on Granada Reports. Inevitably the gigs sold out in a heartbeat, however, the MiF box office are in the habit of releasing last minute tickets on the day and sure enough I was able to bag one for tonight.

Stepping into the Granadaland studios, it’s a bit like the Old Grey Whistle Test – all the bits of leftover studio kit and numbered sections, crosses on the floor left from some previous broadcast, industrial pipework, it’s a perfect setting. DJ Dave Haslam and Option have produced an eerie, hushed soundtrack to set the scene which creates the right mood for something a bit out of the ordinary. The show begins with conductor Joe Duddell stepping up to conduct the 12 piece synth orchestra who will back the band – like a 12 piece Kraftwerk arranged in a 2×6 ‘Celebrity Squares’ style grid and they begin with ‘Elegia’ from Lowlife which sounds immense – the synth players are all classical musicians from the Northern College of Music and are sight-reading and playing the sequenced parts ‘live’ which they will do throughout the show. Not only does this create a fantastic visual spectacle, it also sounds magnificent. Liam Gillick’s set has the musicians behind sort of Venetian blinds which elegantly open and close according to who is playing and when closed create a backdrop for the lights to play across.

Bernard, Steve, Gillian, the bloke from Marion and Bassbot 2000 (the android replacement for Hooky) come on stage and launch into ‘Who’s Joe’ from ‘Waiting for the Siren’s Call’ which is not an obvious choice and indeed that becomes the theme of the night and it’s a hugely refreshing change from what would normally happen at a New Order gig. Given the synth orchestra behind them I expected they might use early, analogue synth driven tunes like ‘Everything’s Gone Green’ or ‘586’ but in fact they have picked tracks with more layered, orchestral, synthesised string parts that the musicians can perform – which makes sense on the next song which is ‘Dream Attack’, seldom played since 1989 and of course has an epic string part which the ’12 Gillians’ attack with gusto (ironically freeing up the actual Gillian to play guitar)

It’s not all epic Synthtopia. Things are dialed down a bit while the band crank up the guitars and launch into Joy Division tracks ‘Disorder’ and ‘Heart and Soul’ and best of all ‘Ultraviolence’ from the Power, Corruption and Lies album – all of which present a range of vocal challenges (not least of which singing something like Ian Curtis) which I have to say the 61 year old Bernard Sumner tackles with ludicrous ease. I also relish catching the odd glimpse of Stephen Morris, and seeing him clatter the drums with the same precise energy he does on those old 70s Joy Division clips is quite something. That old adage about the drummer being the most important one in the band I think may still apply here (and indeed he drums throughout – even when you’d expect a machine to take over).

‘Shellshock’ brings those mid 80s Arthur Baker/Electro Beats back which I’ve not heard New Order go near for such a long time and it’s fantastic to hear them cranked up really high.
A highlight for me is ‘Subculture’ – a cracking song but not one you’d usually hear and the 12 Gillians really come into their own with the multi-layered synth parts.
Bizarre Love Triangle is one of the few concessions to actual ‘hits’ – but the we also get another warmly received track from Technique the excellent ‘Vanishing Point’.

The encore is Your Silent Face which is gorgeous and Bernard gets a big cheer for his Melodica solo – but the final track is Joy Division’s ‘Decades’ which is a perfect place to end. The synth players bring it to new life – it’s devastatingly beautiful and perfect – New Order and 12 musicians from our local Northern College of Music, playing a very pivotal Joy Division song in Granada Studios right next to the place the Railways, Canals and industry started with Steve’s industrial rhythm – it makes me feel a bit Paul Morley and think this is perhaps an end, and hopefully a new beginning and – maybe – Manchester….we can make it. So it Goes.

Fat Alex is here of course (it’s the law) and I can hear the diehard ‘Vikings’ down the front, but otherwise a rather well turned out, more of an Arts Festival crowd (as it was an Arts Festival)- the bar sold out of Wine!. Although the gig was sold out they were sensible with the capacity for the room so it wasn’t too packed (good job as it was hot!) and there were no queues for things which is always nice.

I was a huge New Order fan as a teenager, and recall eagerly awaiting each new release, wrapped in the latest graphic puzzle Peter Saville had produced (the one with no name or song titles on was usually a giveaway). The sleeve would contain another messy 12″ Disco epic straight out of Salford (and Macclesfield). Live, they were an unpredictable bunch, rarely the same set list from one night to the next and there was the sense it could all fall apart at any minute (which it frequently did).
A lot has changed since then but tonight felt very ‘Factory’ (complete with a £5 newspaper ‘programme’ written by Paul Morley). This was very much like New Order reconnecting with the weird old world they came from and it was great to hear them stray from ‘the hits’ and hopefully they learned something too.