You are here: Home / Films / Invasion Of The Body Snatchers 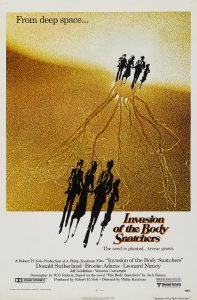 As a child of the 80’s I have memories of this distinct atmosphere that was the lounge after 9pm at night. If you stumbled downstairs, with a bellyache, thirsty or just unable to sleep the television always looked and sounded a certain way – this fuzzy tone to all the scenes as if being played via a cushion and the films (and it was always a film) were lots of talking in rooms. At first glance the opening scenes of this 1978 remake of Invasion Of The Body Snatchers perfectly sums up that feeling. Weird outdoor scenes followed by 70s young people having conversations while a TV blares sport in the background and a bit of snogging.

I think it’s probably really hard to come to this film afresh as it’s been parodied and ripped off despite being a remake of a 1956 B-movie itself. The original was (despite claims to the contrary later) a thinly veiled allegory about McCarthyism, reds under the bed, small town paranoia and cold war fearmongering. By reimagining events in a city like San Francisco it perhaps makes the film more relatable but also taps into the alienation and disconnection people in a metropolis can feel.

We meet Elizabeth Driscoll (Brooke Adams) and her dickhead boyfriend – we know he’s a dickhead cos he breaks off some serious lovin’ to applaud sporting prowess on the TV and later tries to get down and dirty when she is trying to do some work. He’s a total git and we really don’t mind that he’s one of the first people we see “bodysnatched”. Meanwhile Donald Sutherland, all perm and ‘tache is trying to raise the quality of the city’s restaurants via health inspections. As the film progresses he slyly uses the fact that Elizabeth’s boyfriend is a) a dick and b) a pod person to cop off with her a few times. And frankly we can’t really blame her.

I think I last saw the film around 20 years ago in one of those student all night horror VHS binges and it has aged particularly well. It has that physical body horror style that David Cronenburg would soon make his staple diet which in these days of CGI have a realism that computers can’t quite replicate. Yes it’s slightly jerky and basic but it’s, well, sticky and ookey too. The scene with a set of pod people being hatched and slowly becoming replicas of the main protagonists is eerie and unsettling stuff.

The sound mix – not muffled and dense like my childhood memories – is superb as is the slightly unhinged and avant garde electronic score that soundtracks fleeing, hiding, hatching and general mayhem. I’m guessing viewers in 1978 would regard this in the wake of Vietnam and Watergate a metaphor for government surveillance and wrong doing. The authorities seem to be the first to fall under the invading powers sway with the police, politicians and even the refuse workers making the project run smoothly by clearing away the bodies of the original people quickly.

Yet whatever the social commentary it’s still a genuinely unsettling and creepy film. Again am rewatching this via Arrow Blu Ray (£6 from Fopp) and it has some lovely extras including a great “pub table” conversation between Horror dude Kim Newman and directors Ben Wheatley & Norman J Warren.

I highly recommend it but whether buying it online or in store, don’t look at the newly designed cover art too closely if you haven’t seen the film as it contains a major SPOILER!!!! which I haven’t used as a pic for this review.

The Thing, The Fly, that sort of thing