You are here: Home / Nights In / Fay Hield – Wrackline’ 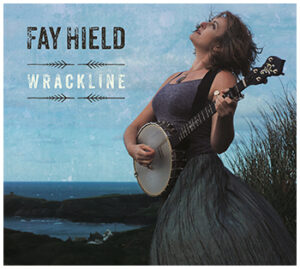 Twelve songs, 47 minutes and an aura of magic. Northern lass Fay goes in search of the Otherworld – a place of strangeness, adventures, wistful pathways and sorrowing souls. A coherent, compelling sound world envelopes the album, with Fay’s rich voice supported by banjo (herself), guitar and harmonium (Rob Harbron), violin and viola (Sam Sweeney), double bass (Ben Nicholls) and jaw harp (Ewan MacPherson). Happily, not all at once, usually. On first listen, I felt that maybe there were one or two arrangements too many that featured the polyphony of strings and harmonium but on further listens – three in a row today, for instance, while grappling with various annoying tasks – it all clicked into place: it’s ALL ‘just right’.

Fay’s voice is reminiscent, to my ears, of the late Maggie Doyle in terms of her clear diction and a certain throatiness and of Norma Waterson, in the matriarchal depth and heft and the ‘northern’ twang; in places, a turn of phrase or an air of sadness brought to mind Anne Briggs, a singer of a very different sort. These are only loose pointers. Half of the songs are Fay’s own and of the other half labelled ‘trad’ it is clear that she has intervened significantly in either finding or shaping the material. It wasn’t just sitting there on Martin Carthy’s kitchen table going spare. ‘Hare Spell’, the album’s lead track, is a good example – a spell of changing from 17th witch Isobel Gowdie set to an incantatory pulse by Fay, with her crew brewing up a cauldron of woody, rustic drones and filigrees around it.

This is a really original work of real depth and emotional weight that feels so effortless that it can only be the product of much learning from all involved. It rewards and withstands repeated listens, and like the fay inhabitants of the Otherworld, it will reveal its wisdom at its own pace, wreathed in leaves of mortal sadness and momentary mischief. Being lost in it is a joy.

That folk music’s not dead. And that genres aside, Fay Hield is a distinctive artistic voice, with something to say, and a beguiling voice with which to say it, skilled at songcraft, arrangements and creating a ‘complete’ statement in the album form.

…modern life. Because it’s a momentary distraction – a glimpse into Galadriel’s mirror. Your way of thinking may, for a time, be altered when you gaze up again.

The singers I mentioned. An aural adventure. Immersion in another world.