You are here: Home / Nights Out / Dweezil Zappa – Hot Rats 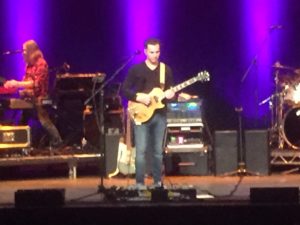 So, Dweezil is 50 and so is Hot Rats, and a bunch of predominantly old farts turned out to celebrate. It was my second DZ gig in Oxford, having lucked into a front row seat to see him play Apostrophe, my all time fave FZ album, complete with some pre hologram guitar interplay with some film clips. That evening set the bar pretty high and I wondered how well an evening of Rats would compare.

This time I was accommodated in the middle of row N – a good view of the stage for sure (in fact better than the front row where the back of the stage drops out of sight), but in seats that only a midget could describe as comfortable. The woman next to me liked to mark time with her right foot – I know because I felt every slightly off the beat stomp. More than a little distracting.

But what of the music? The mix was clear and not so loud as to trouble those of us with hearing aids, although not quite loud enough to drown out the Boden clad arsetrumpet behind me who clearly hasn’t had an unexpressed thought since Hot Rats first release. A slight oddity in that the set opened with “Don’t Eat The Yellow Snow” before walking through “Rats” in the order it was presented on disc. I’m not enough of a Zappa fan to know just how close DZ kept to the originals. All I can say is that I barely noticed he covered all the violin parts on the guitar and “Peaches” and “Gumbo Variations” never sounded any better to me. No sign of the brown Gibson SG – DZ used a gold Les Paul with a Bigsby arm for most of the set.

The end of “Rats” signaled half time, allowing Boden man a chance to get himself and his spawn another 2 rounds of Budvar, while I attempted to try and uncrowbar myself out of my seat, just in time for the house lights to dim again, and a second half of some fairly eclectic song choices. “Montana” was an easy to spot starter but thereafter there were songs I knew – “Who Needs The Peace Corps”, “Bamboozled By Love”, “Heavenly Bank Account”, “Any Downers” and a few I either had to rely on DZ’s intros (like “Twinkle Tits”, or Setlist.fm (“Here Lies Love”, “Cletus Awreetus- Awrightus”). Oh and “My Sharona”.

Scheila Gonzalez was the only band member I recognized from the previous gig. I hope she’s getting paid as much as the best of the band put together as she’s pretty much a key part of every song she plays sax, flute, percussion, keyboards and guitar. That said Adam Minkoff isn’t that far behind in terms of versatility and does a first class job on vocals.

When I saw the “Apostrophe” set, it came across as Dweezil paying / playing a respectful compliment, but not trying to “be” Frank. This set was different. Dweezil’s patter with the crowd seemed to be more in FZ’s voice and style, and the part where Minkoff pretends to be Johnny “Guitar” Watson for some improvised joshing with Dweezil was amusing but very directly lifted from almost any FZ gig in the 70’s onwards, and I was left unsure if I really liked the degree to which appreciation had morphed to imitation.

Not just men over the age of 60. But they were in the majority.

A set of very difficult songs, played to a very high standard.