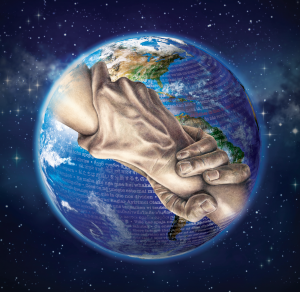 Common Ground, the new album by Big Big Train, will win Album of the Year at The Prog Awards, (Frost*’s Day & Age will be a close second,) and should be a contender for that title at The Classic Rock Awards too. Yes, it is that good, and I am that confident. It is their best since 2012’s English Electric (Pts 1&2), despite the 4 albums since then all being of the highest quality.

The album starts with three (sit down, BBT fans, in case you fall down with shock,) up tempo songs. The Strangest Times will be a terrific show-opener, and is singer David Longdon’s take on what we have all been going through since March 2020. This is followed by a Nick d’Virgilio song, All The Love We Can Give. The song works perfectly, has a huge chorus and will be a big live hit, I’m sure. The third ‘rocker’ is Greg Spawton’s Black With Ink, a more familiar narrative for regular listeners, as it delves into the city of Alexandria, during Roman times. This will be another live favourite which features Nick, Rikard, and new live member, Carly Bryant on alternate verses, with David leading the choruses.

Dandelion Clock is a beautiful Greg Spawton song about the passing of time and then there are two wonderful instrumentals. Rikard’s piano piece, Headwaters, leads into Apollo, NDV’s “quintissential prog instrumental”, as he puts it. It steams along at a rate of knots, features all of the band, (and their three new live members,) on sparkling form, before slowing to a coda featuring the band’s celebrated brass section. Another live workout which fans will love.

The album’s title track, David Longdon’s Common Ground, is an unapologetic love song and reflects what has been going on in his life. To my ear, there is also a hint of nostalgia for the three members who alighted from the train, since the end of 2019, but also excitement about what lies ahead, both personally, and for the band. And then, fellow Passengers, comes Greg’s fifteen minute epic, Atlantic Cable, the story of laying the 3,000 mile telegraph cable, completed in 1866. In terms of those wonderful, history-based BBT songs, it is right up there with the very best, bass pedals and all.

The album ends, appropriately, and achingly, with Endnotes, a beautiful song which builds to a brass-crescendo, (Passengers, think of the live version of 2009’s Victorian Brickwork.)

This album continues their progression, in a new and exciting direction, one which will thrill their hardcore fans, but will also delight new ones, new ones who will climb aboard and discover that the journey has a rich past and a wondrous future.

Afterworders will know how much BBT means to me. Since Beany posted a video here, in 2013, I have fallen, head over heels, in love with them, and their music. At my age, I thought I would never feel about music the way I did when I was 16, ever again. BBT made that happen, and continue to do so. They have a very loyal fan-base, (the band’s FB page is an oasis of polite calm) and they are important, to so many people. They make the hairs on my neck stand up and I have cried proper tears at their gigs. The really matter to me.

All of their previous albums.