You are here: Home / Nights In / Barbara Thompson – Live at the BBC 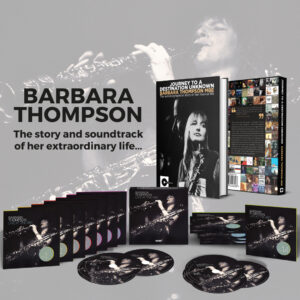 This can only be the most impressionistic of reviews, because the quantity of music is immense and I don’t have the requisite muso ‘chops’ to critique it properly even if I had the time. But I *have* had the time so far to listen to around two-thirds of it, and some of that twice, and it’s terrific, so…

What is it and what does it sound like? Well, it’s 28 BBC broadcasts spanning 1969–90 by groups led by British jazz woodwind maestro Barbara Thompson (principally the Latin-ish Jubiaba and the melodic jazz-rock-ish Paraphernalia, along with a 1969 quintet session with co-leader Art Themen, a 1989 quartet session, a 1970 octet + strings session and a 1971 12-piece + strings session) plus a few fantastic broadcasts in which Babs was a player – a New Jazz Orchestra session from 1969, a Dave Gelly Sextet session (in tribute to enigmatic late pianist Mike Taylor) in 1969 and a 1978 session in which she was a featured addition to the Don Rendell Five, Don being one of the British jazz greats of the 1950s–60s whose playing was progressive and distinctive, but who eschewed the jump into ‘jazz-rock’ made by his 60s co-leader (of the Rendell/Carr Quintet) Ian Carr.

As for the sound, 13 of the 28 broadcasts derive from master copies retained by Barbara or her late husband Jon Hiseman, while the rest come from various off-air collections. Restoration/mastering wizard Eroc has done an incredible job with all of these sources. At no point is the audio ‘hard-going’ – the music lives and breathes throughout.

I have a fascination for 1960s British jazz, which seems to me to have a particular flavour of the era and the place, so the early broadcasts – four 1969–70 outings on CDs 1 & 2 and a 1971 12-piece+strings set on CD3 – are especially to my taste, all featuring many of the great pool of players from that era that decorate all sorts of albums, ensembles and archive unearthings from that febrile end-of-the-decade period.

Although Barbara isn’t given any solos in the 1969 New Jazz Orchestra set, led by Neil Ardley and featuring such greats as Frank Ricotti (vibes), Ian Carr (flugel), Dick Heckstall-Smith and Dave Gelly (saxes) plus Jon Hiseman on drums, it’s a splendid addition to their two bona fide albums ‘Western Reunion’ (1965) and ‘Le Dejeuner sur l’Herbe’ (1969) and to the previous trio of archive releases, from other broadcasts and concert recordings.

The 1969 Dave Gelly Sextet set in tribute to the then recently deceased Mike Taylor features Dave on tenor sax/clarinet, Barbara on flute/soprano sax, Howard Riley on piano, Frank Ricotti on vibes, Jack Bruce on bass/vocals, Jon Hiseman on drums. Taylor’s music was in some way the bit in the Venn diagram between the avant-garde world of Howard Riley, straight melodic jazz and the leftfield-ish jazz-blues-rock of Jack Bruce and Jon Hiseman’s Colosseum – quirky, angular, odd yet accessible. The Bruce/Riley/Hiseman trio version of ‘Jumping Off the Sun’ here is like an unknown outtake from Cream’s ‘Wheels of Fire’ or his solo debut ‘Songs for a Tailor’.

The one-off Thompson/Themen sextet (also 1969) also features Howard Riley, plus John Marshall (Nucleus/Soft Machine) on drums and Ron Rubin on bass. ‘Stratinum Platinum’ in this set is the first time we hear a Babs original – and it’s intriguing to hear how angular and Riley-esque it is, in part, with a more ‘straight-ahead’ section making up the other part, and some pretty free-wheeling soloing.

I was very slightly involved in this box set, which was led by Barbara’s daughter Ana. Aside from proofreading Dave Gelly’s superb booklet essay – which, for a writer on music, is akin to a football buff polishing the shoes of Pelé before a game – that contribution was principally in pinning down one or two dates. The most problematic was a session with Gary Husband on drums – not even Gary could quite recall exactly when he had been in Barbara’s Paraphernalia, save that it was a brief period, maybe six months. He was delighted to hear it again, having not recorded anything else with the band. We eventually identified that set as March 1979, and it’s a great one, with Colin Dudman on piano and Roy Babbington on bass – a lean, mean quartet with tremendous space and dynamics.

Later that year, Jon Hiseman joined his wife’s band on drums and Dill Katz came in on bass. There are two sessions as a quartet before a fifth member is added, Pete Hartley on violin. The rest of the box set – 10 sessions/concerts spanning 1981–90 – feature a five-piece version of Paraphernalia, usually with violin (Anthony Aldridge and then Rod Dorothy replacing Hartley) but on one occasion with Paul Dunne on guitar. It all adds variety, though personally I prefer – in general – the more spacious quartet sound.

There is, in short, loads to hear and discover in this set – and none of it is inaccessible.

These are only a few thoughts and impressions. With 14 CDs and a 36-page booklet with comprehensive information, memoir and appreciation for an amazing £65, this amazing value for money – lots of listening, lots of variety, lots of great players and playing. And I don’t believe you need any previous knowledge of Barbara’s music. I didn’t have any. Many of her pieces that feature her flute playing are reminiscent, to my ears, of the airier moments in the Jethro Tull canon and, in one piece, where flute is played with an echo effect, it reminds me of the first Quintessence album. To me, that is a good thing!

Barbara’s newly published autobiography ‘Journey to a Destination Unknown’ – very readable and fabulously presented in hardback with copious images throughout. £25 from the not-for-profit Jazz in Britain label.