Obviously this will have been covered before, but there’s always new stuff out there. Scenario: 13-yr old daughter showed some interest a year ago in learning guitar. That was all the incentive I needed to get an acoustic (I’m a bassist mostly), and I picked a very nice Tanglewood, a real bargain. As is so often the way, she never quite round to it, but now that we’re housebound for the foreseeable future the interest has returned. I’ve shown her a few chords but she’s also keen on trying an app on her iPhone, or YouTube videos etc. So – anything to recommend? Anything to be avoided?

I can’t say that I’ve used UltraViolet a great deal. I had to check how many movies I had in my library and it’s only a handful, all of which I already had a hard copy of. Anyway, turns out the service is closing down this year – which only goes to justify hanging on to those discs.

I first heard Ryan Hamilton’s exuberant ‘Strength in Numbers’ on Little Steven’s Underground Garage and was sad to miss the Aug 2017 tour, so the opportunity to catch him so soon after was too good to miss. This was my first visit to the Joiners, and my word it’s small. It claims a 200 capacity but that must surely include the bar – the stage depth is about the same as the distance to the desk. This turned out to be a blessing since the gig was only sparsely attended, and support the Main Grains (think of the Ramones with Geordie accents) appeared to have brought their own fan club with them. No matter; RHatT took the stage in good humour and referred to the cosy atmosphere frequently. Ryan himself got plenty of opportunities to banter with the crowd since his Gretsch needed retuning every other song. The guitarist’s Bowie T-shirt prompted a good-natured debate about pronunciation, which in turn led to an improvised song with a working chorus of ‘David Bowie and ZZ Top’. But the music’s what we’re there for, and it doesn’t disappoint; his brand of Texan power pop is » Continue Reading.

This year we’re off on our hols to Northumberland, based in Alnwick. Never been in the area before so we’re not going to be short of things to do, making the most of the National Trust for starters. But I’d welcome any suggestions or recommendations for: – Walks in the Cheviots and along the coast, nothing too strenuous (say up to 5-6 miles) – Pubs and restaurants etc – Any rainy day attractions (kids are 11 & 13)

If I had to sum this up in one word, it would be joy. The ghost of the much-missed Stuart Adamson is never far away, but his guitar parts are recreated by Bruce and Jamie Watson, sounding uncannily like SA even without that battered old HH amp. They and the rest of the Skids (Richard Jobson, Bill Simpson and Mike Baillie) are clearly having a ball – I haven’t seen a band enjoy themselves this much since Bob Mould played all of Copper Blue in 2012. They start brilliantly, using “Peaceful Times” as their walk-on music and crashing into “Animation”, and it doesn’t let up. It’s around the tenth date on their tour but they’re playing like it’s the first, such is the air of rediscovery. The set comprises most of the singles plus a fair mixture from their first 3 albums, and Jobson’s very talkative throughout; it’s the day after the election so TV Stars includes namechecks for cabinet and shadow cabinet alike. Right at the end they indulge in one song off the new album and it’s OK. Fair enough.

As you’d expect, overwhelmingly blokes the wrong side of » Continue Reading. 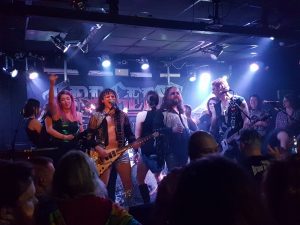 This lot have been mentioned on the blog before: their tagline is “all-metal tribute to the Bee Gees and beyond”, which puts it in a nutshell.

They take to the stage after midnight, by which time much of the audience is well tanked up. Nominally a 6-piece, in reality they are a 5-piece plus a little guy called Lance – towel boy and kind of their Bez, except that his percussion is limited to the confetti cannon and glitter gun. The 5 or so Bee Gees songs are probably the best part because 3 of them can hit the high notes properly, but that would be a bit limiting, hence the “…and beyond”. And so we get the other songs, and this is where it gets a bit weird. You know how you get sudden recall of something regrettable you did, but had forgotten until then? Since the gig, from time to time I’ve remembered another song they covered, and it felt like that. There were a couple from Grease: the title track and “You’re the one that I want”. Also popping back into my memory: “Funky Town”, “Africa”, “Do ya think » Continue Reading.

You may have heard the Goldfrappy “Rushing Through My Mind” on 6 Music recently; that was my introduction to the Liberation. Actually that’s as close as they get to Alison and Will; JO & co are more guitar-heavy, and this is even more obvious live. What you get is a properly woozy wall of sound, psychedelic and mesmerizing with a projector show to match. There are shades not only of the late 60s, but also early 90s shoegazing; both guitarists use fuzzy single-coil Fenders drenched with delay, and there’s a lot of My Bloody Valentine-style vibrato-stroking (at the edge of feedback, natch) going on. The band themselves are understated; movement is limited but there’s barely enough room to accommodate all six of them on the stage anyway. Vocals are way down in the mix – no emoting here – and banter is minimal; we get “thank you” about five times with “Oxford” thrown in once for good measure. But leaving the last chord ringing such a long time that it was still audible as Josefin hit the merch table was a nice touch.

My only gripe would be that it was too short; » Continue Reading. 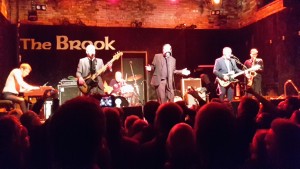 Yes, with these 3 bands together (four original members between them) it’s very much a mod night. First on are the Lambrettas, who turn out to be the surprise package. Vocalist Jez Bird may have died years ago, but guitarist Doug Sanders is in fine form, and the addition of a brass section for half the songs and a light-footed, almost ska-like approach makes them hugely likeable. There are a few covers – All Or Nothing the best of them – interlaced with their own songs, inevitably ending with the two you know, i.e. Poison Ivy and Da-a-a-nce. Probably the most enjoyable of the three, proof that there is little more infectious than a band clearly having a ball. Next up are the Chords, guitarist and songwriter Chris Pope the only original left. They’re the only band to have dispensed with the mod attire, taking a more relaxed if frenetic approach to the back catalogue. There’s even the odd new number, Pope proudly announcing that they’d reached the pledge minimum for their new album that same day. But of course we’re there for the familiar songs and sure enough we get So Far » Continue Reading.

As I was mowing the lawn the other day, Blue Oyster Cult’s Subhuman came on the iPod and it got me musing on their wheeze of recycling the song over a decade later for the eponymous track. (Actually, I gather that it originated as a poem called “Blue Oyster Cult”, and they used it for the lyrics to Subhuman. But I digress…) In that instance they kept the lyrics and changed the music.

This is only one way of recycling songs, or parts of songs:

The “let’s just change the lyric” approach: 7 Chinese Bros from REM’s Reckoning became Voice of Harold with Michael Stipe singing the sleeve notes from a gospel album. Even more blatant is Neil Young’s Train of Love and Western Hero – both appear on Sleeps With Angels

Then there’s the “I like this bit and can re-use it in another song” approach, used by Pete Townshend: the end of “Glow Girl”, relatively little known at the time, became the start of It’s a Boy in Tommy.

The “this bit backwards sounds great – I can make another song out of that” approach – thus the Jam’s Dreams of Children begins with a bit of » Continue Reading.