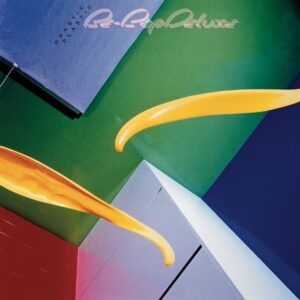 The final release in the Cherry Red reissue series of the Be Bop Deluxe studio albums, this is the band’s fifth and last album. Available as a 4cd, 2dvd box set or a more pocket friendly 2cd set. Both sets contain the original stereo mix, a new stereo mix and contemporary bonus tracks. The box set contains a cd of Bill Nelson’s demos for the album, another containing BBC performances, a Peel session and an In Concert performance from Jan 1978, and a dvd with a BBC Sight and Sound In Concert set (all these performances were previously released on the 2013 Be Bop Deluxe at the BBC 1974-1978 set), and a film by Bill Nelson of the band at the album sessions in France, which is readily available on YouTube. The second DVD features a 5.1 surround mix of the album and the bonus single and EP tracks.

After the band’s previous album, Modern Music, Bill Nelson was feeling restless, wanting to move on from the ‘guitar hero’ tag and open the sound out a little more. He decided to split the band, but of course the band’s » Continue Reading.

The fourth release in Cherry Red’s retooling of the Be Bop Deluxe back catalogue. This time it’s the debut album from 1974. It follows the format of the previous sets – 3cd’s and a DVD in the box set, and a more modestly priced 2cd version comprising of the original version and the new remix versions of the album.

This album was recorded with the original lineup, Bill Nelson joined by rhythm guitarist Ian Parkin, bassist Robert Bryan and drummer Nick Dew. They had formed in August 1972 and played their first gig in that hotbed of rock North Ferriby, Hull the following month.

The new mix is as sparkly clean as the previous albums, with more echo on the vocals and (unsurprisingly) sharper guitar tones. When you play it next to the original album, it just shows how disgracefully muddy the original release was – this is understandable when you take into account producer Ian McLintock’s apparent substance abuse during the recording.

The new clarity does, however, reveal the limitations of the band – especially the drumming. Maybe it was the equipment, but the drums sound leaden and dragging. Nelson’s vocals sound weedy, » Continue Reading.

MIke Love’s Beach Boys touring jukebox are playing at a trophy hunters’ convention in Reno. Brian Wilson and Al Jardine are supporting a petition urging them to withdraw, and encouraging fans to botcott the band if they insist on playing. I know who I’m with…

The third in Cherry Red’s ongoing remaster campaign of the Be Bop Deluxe back catalogue, Modern Music is the band’s 4th studio album, first released in 1976. A 4CD, 1DVD box set or 2CD version for the less committed/completist.

Nobody should come here expecting a less than enthusiastic review – this is one of my all time favourite albums, one I’ve lived with for 40-odd years and know inside out and back to front!

Disc 1 is the new master (all remastering by Stephen W. Tayler) of the original stereo mix, a perfectly good base from which to start. Disc 2 is where the fun really starts. This is the new 2019 stereo mix, and is, as was the case on the previous releases, a stunning reinvention. The whole thing is as crisp as could possibly be expected. Bill Nelson’s guitar and vocals are sharper and clearer, with the sound a more ‘widescreen’ feel. What really stands out, though, is Simon Fox’s drums, with crystal clear cymbals and a nicely booming bottom end. This will certainly become my ‘go-to’ version of the album. Disc 3 contains a BBC In Concert live show, recorded on » Continue Reading.

The second in the reissue series of the Be Bop Deluxe catalogue from the fine fellows at Cherry Red records, a 3CD, 1DVD set. This time it’s the second album from July 1975. Bill Nelson had split the original line-up of the band after the first album, Axe Victim, and following a false start with 2 members of Cockney Rebel on keyboards and bass, Futurama was recorded with bassist Charlie Tumahai and drummer Simon Fox, Bill Nelson playing keyboards as well as guitars.

CD1 contains the original album mix, with 2 bonus tracks, both of which have been readily available on previous releases. CD2 contains a new mix of the album and another set of bonus tracks. CD3 has a Peel session from March 1975 which was last available on the ‘At The BBC 1974-1978’ set from 2013, and an ‘In Concert’ from May 1975 which seems to be commercially available for the first time here. The DVD (not part of the review set) has a 5.1 surround sound version of the album (and a selection of bonus tracks), the band’s Whistle Test appearance from July 1975 and a promo video for the single » Continue Reading.

A 4 disc box set expanding an album I’ve lived with for more than 40 years, as familiar as the back of my hand. A set put together by the fine fellows at Cherry Red, who have acquired the rights to the Be Bop back catalogue. Inevitable, I suppose, that they choose to start their reissue campaign with the album that contains the one real hit Be Bop ever had, but it would have been nice to do them in chronolgical order. Disc 1 is a remaster of the original mix with the addition of the single edit of Ships In The Night (the hit!), a familiar old friend featuring all Bill Nelson’s regular gifts and foibles, He always had a way with a florid, image-laden lyric and interesting guitar work, although on this album, I’ve always felt he was often straining too hard for the ultimate, knock-your-socks-off solo rather than letting it flow. Still a great collection of intelligent, well constructed songs that have been a bit part of my life for so long. Disc 2 is the real treasure in this set, a new mix of the album with 6 additional bonus » Continue Reading.

The latest in Bill Nelson’s reissue campaign for work originally released on his Cocteau Recoreds imprint, on Esoteric through Cherry Red. A 3 disc set comprising 3 separate projects, they reflect the instrumental work Bill was moving towards in the early 1980’s. All recorded at the grandly named Echo Observatory, which in reality was the back bedroom at Bill’s home.

Disc 1: Sounding The Ritual Echo (Atmospheres For Dreaming), originally released as a companion to Bill’s first solo album, Quit Dreaming And Get On The Beam. A set of short instrumentals, it suffers from the obvious lack of a recording budget which hamstrung Bill’s work around that time, particularly in the use of a fairly basic, tinny drum machine. Nontheless, still a set of interesting tunes of the type that became the mainstay of Bill’s (almost entirely instrumental) output from the time he finished his contract with Phonogram in the mid 80’s and became a one man cottage industry.

Disc 2: Das Kabinet (originally released in 1981). This was a soundtrack commissioned by the Yorkshire Actors Company for a stage adaptation of the classic silent film ‘The Cabinet Of Doctor Caligari’. A dark, brooding » Continue Reading.

New song from Colin Moulding and Terry Chambers trading as TC & I. Absolutely glorious – possibly the most cheerful funeral song ever.

Why are more people not this honest about the recently depoarted? (courtesy Graham Parker on Twitter [@ItsGrahamParker])

As posted by Mr Partridge on Twitter – his contribution to the Monkees’ new album. Recognisably Partridge, predictably wonderful.